A Ritual of Flesh: The Dead Sagas Book 2 by Lee C Conley 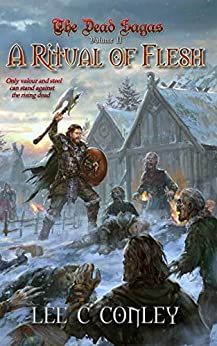 As evil ravages the north and the dead walk, all eyes fall to Arn… The apprentice journeys south, home to the College, unaware of the dark events that transpired in the High Passes after his departure. His leg in ruins, and haunted by watching shadows, the College council in Arn awaits him, but he does not travel south alone.
Arnulf and his warriors must travel to Arn also, with tidings for the king of the risen dead and the terrible curse which has destroyed all that he knew. Arnulf seeks vengeance upon the College, but must choose wisely if he is to save his son.
Meanwhile in the west, Bjorn and his strange Wildman companion report back to High Lord Archeon at Oldstones with grim news of cannibal Stonemen encroaching from the Barrens, but is embroiled in news of war and invasion as Archeon requests his service once more.
In the capital sickness awaits them all, Nym has fled to the city and must now continue her struggle for survival on the plague ridden streets of Arn, keeping all who she cares for safe from the halls of Old Night.

The many threads of this Saga converge on the city of Arn, but amid plague, invasion and terror, a greater darkness is looming. Dark forces are seeking to unleash evil upon Arnar, honour and renown is all, and sword, axe and shield is all that stands between the living and the grasping hands of the dead.

Bar your doors. Fetch your axes. Hide your loved ones. The dead are walking...

A Ritual of Flesh starts in a period of calm after the horrifying events of the first book, A Ritual of Bone. The characters take stock and begin to come together, uniting the various storylines as the second book of The Dead Sagas progresses. They are fleshed out (or fleshed off, depending on how lucky they are), and I began to care more for each of them. I had questions at the end of book one and my mind started to tick over even more possibilities the further I got into Flesh. I started coming up with conspiracy theories! I was nervous for everyone and increasingly curious as to what was behind the events of the novels.
The initial calm period while the characters travel and plan is unsettling, as though there is something lurking just out of view throughout. You know something awful is slowly unfolding and most people are unaware, but Conley expertly builds the tension for the reader until things finally erupt. The last third of the book is a motorbike ride through hell - I couldn’t stop turning the pages. A Ritual of a Flesh is, to me, a superior book to A Ritual of Bone, building on what came before, developing the country of Arnar as well as the already fascinating characters and scenarios. I look forward to the next book in the series!

I own the hardbacks as well as the Kindle editions, and they are absolutely beautifully presented. The audiobook for Ritual of Bone was cracking too...I will get the audiobook for Flesh in due course.