We Men of Ash and Shadow by HL Tinsley 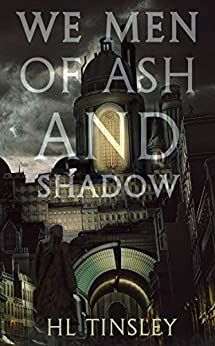 Amidst the gas lamp shadows former soldier-turned-mercenary John Vanguard hunts criminals at the behest of his corrupt employer, Captain Felix Sanquain. Shamed by his deserter past and seeking to make amends for his many misdeeds, a chance encounter with Tarryn Leersac – a skilled young would-be-assassin fallen from the graces of high society – leads Vanguard to become an unlikely mentor.

Charged with hunting down the killer of two guards left washed up on the banks of the canal, the further Vanguard delves into the underbelly of the city the more he finds himself entangled in a web of secrets and lies. A prominent aristocrat is missing. Crime lords, con men and harlots run amok and the city teeters on the brink of another revolution.

With his already precarious reputation hanging by a thread, Vanguard must piece together how and why the last war came to pass, find a way to earn redemption for his mistakes and come to terms with the past in a city where few survive, and even fewer can be trusted.

I’ll begin by saying that HL Tinsley writes beautifully. Her descriptions and characterisation are first rate, and she pays attention to details, which bring scenes to life in unexpected ways. And, man, she is brutal.
The structure and style of the book is a talking point in itself, with an omniscient narrator who initially paints the city in what feels like a series of vignettes. I finished the book this morning, and I am still reflecting on it, remembering little moments and realising the symbolism.
John Vanguard is a broken man, an old soldier, walking the gutters of D’Orsee, a sprawling city that reminded me of both the 18th and 19th century, made up of zones differentiated by the class of their occupants. The brooding, menacing story follows its haunted protagonist as he begins to see the bigger picture. HL Tinsley does not give information to us on a platter, does not give it all away at once. She lets the tension build until the exactly the right moment.
I bought the book on Kindle and, before I had finished, I knew I was going to be a fanboy, so I bought the paperback too, something I am trying to avoid doing due to space constraints.
We Men of Ash and Shadow is totally immersive, evocative and, at times, challenging. It is reminiscent of Bernard Cornwell’s Sharpe, Assassin’s Creed, Sherlock Holmes and Les Miserables!
I need to read more about both the past and the future of John Vanguard!